advice on end of life issues for people and pets
You are here: Home / Uncategorized / Fireworks and Dogs Don’t Mix: What to do if Your Dog Becomes Lost. 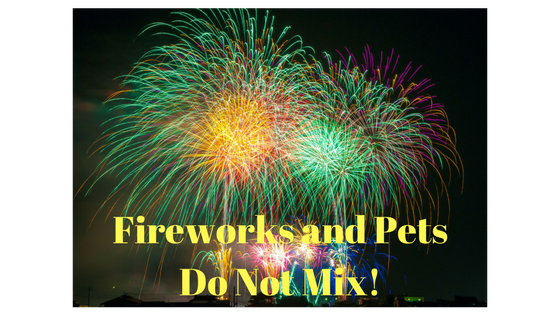 Did you know at July 5th is one of the busiest days for animal shelters and governmental animal control facilities?  Not only does intake and occupancy increase, sadly so do the amount of pets who die unnecessarily from a preventable accident. Below is a true story of a dog names Sophie. Her pet parents wanted others to learn from their experience.

Like all golden retrievers, Sophie loved playing in the water. She had been at the beach all day with the kids, she was

exhausted. So tired that neither her food or a leftover burger was of interest to her.  She was down for the count and laying on the bed in the camper. That was 8:00 p.m.  on July 3rd, 2015.  Shortly before the fireworks started, Mrs. Johnson went to the camper to grab a sweatshirt. Sophie had started to rally and wanted to go outside and go potty. As she opened the camper door, the teenagers in the tent at the campsite next to them shot off bottle rockets and caps. The noise was so loud that sounded like gunshots. This startled Sophie and she bolted. It was that fine line between dusk and daylight and it was hard to see exactly which direction she ran.

Mrs. Johnson texted the family immediately to join her in the search for Sophie, as they were making s’mores around the campfire waiting for the annual fireworks show over Lake Michigan. The family split up and began the search. The went up and down the campsite, across the road to the beach and literally canvassed the area until midnight before they called it a night. Everyone at the campground knew Sophie was missing and that she belonged to the Johnson’s.  What made the search even more difficult is that the town where the campsite resides literally triples in population for the “Light Up the Lake” show.  People come from miles around and begin lining up chairs on the bluff, towels on the beach around 8 a.m. to claim their spot so they can watch the 10:00 pm show. The town’s population triples and traffic is always insane and chaotic at best.

Mr. Johnson couldn’t sleep, his fear was that the children would wake up only to find her by the side of the road, so he walked up and down the road until dawn calling out Sophie’s name and looking for her. He was hoping that someone would have realized she was lost and took her in for the night and then find her contact information on her collar. No such luck.  In the morning the rest of the family resumed the search.  Mrs. Johnson called the police and went to the local animal shelter.  What she learned was that many other families had a similar story.  The shelter director told her that the day after the 4th of July is always the busiest day for them and frankly all animal control or

rescue organizations.  She went on to education and remind everyone in line that animals are innately afraid of loud noises such as thunder and especially firecrackers. Their instinct is to run and hide. The director further went on record to saying that the majority of the pets who are brought to the shelter do not have proper tags, identification or even micro-chipping. Therefore, after 3 days the dogs are placed up for adoption. Fortunately, this shelter was a no-kill shelter. Mrs. Johnson left a photo of Sophie, along with her contact information. If Sophie somehow made it to the Shelter, she knew they would be reunited as her collar, tags and micro-chip were all current.  As she left the shelter, she felt hopeful.

The 4th was on a Friday, so the family made a decision to stay over one more night. They thought that just maybe since the campground and traffic settled down that Sophie might just find her way back to their camper. After all, stranger things have happened.  The next morning, they were awakened by the sound of Mr. Johnson’s cell phone ringing.  It was the local marina that was about 5 miles south of the campsite.  They were calling to see if they had lost a dog. Mr. Johnson’s stomach began to have butterfly’s as looked at the anticipation on his family’s faces only to feel like he was punched in the gut.  The marina owner said that they did not have Sophie, however they did have her collar. It had washed up ashore.  It was then, Mr. Johnson had to come to the realization that Sophie somehow slipped her collar. Did she drown? Did someone take her, remove her collar to claim she was a stray and give her a home? The scenarios were countless. Regardless, it was gut wrenching.  The Johnson’s packed up and headed for home.  On the way home, they stopped at the marina to get Sophie’s collar as they were planning to head home and make a shadow box with pictures of h

er and place her collar in it.  They believed she was dead. Three days later, the marina owner saw a stray golden hanging by the dumpster looking for scraps. The dog was clearly scared, hungry and lost. The owner remembered finding the collar and assumed that this was the dog it belonged too.  He called down to one of the mechanics in the garage and asked if he could help catch the stray.  They made a trail of food using dog treats and lunch meat which lead her to the back of the garage, there they placed a bowl of water.  While the dog was drinking they quickly closed the garage door.  As the men approached the golden, they noticed it was a female and that her fur was matted, covered with burrs, small twigs, and mud.  She looked like she had come out from the woods across the street and made her way to the beach searching for water and food.

The marina owner remembered finding the collar with the name Sophie on it and assumed that this was her.  When he called her by name, she came running to him with her tail wagging.  Sophie’s owners phone number was still in his cell phone. He took a picture of Sophie and texted it.  Within minutes his phone rang and it was Mr. Johnson. He couldn’t believe that Sophie was alive and unharmed. They family was still grieving her loss and feeling guilty for not having her leased at the campsite. Mr. Johnson could not wait to bring Sophie home and re-unite her with the family.

Sophie’s story had a happy ending, this is not the norm.  Fireworks are beautiful, but the stress and anxiety it causes dogs, cats, horses and other animals is real.  Animals need to contained or restrained on a lease.  Animals should not be left outside in their yard, fenced in or not – as they have been known to dig out, jump over or worse yet harm themselves or bite someone out of fear. This also brings to light the importance of having your pets micro-chipped above and beyond providing a custom collar with their identification tags.  When traveling with your animals, don’t assume they will stay close to your side, leash them. Keep photos of your pet on your phone.

If your pet does become lost: