advice on end of life issues for people and pets
You are here: Home / Pet Topics / Pet Death / Meet Lucy – The Story of an Abandoned Puppy-Mill Dog 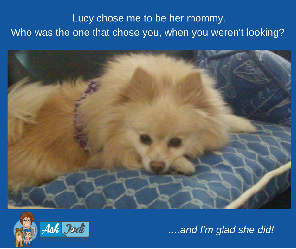 An Abandoned Puppy-Mill Dog. On a brutally cold December morning, a cage containing a four-pound Pomeranian, was found in a snow drift at the Noah Project, a no-kill animal shelter. It was clear she was an abandoned puppy-mill dog. Her situation was grave. It was clear she had recently given birth, as she was laying in afterbirth, with her nipples frozen to the bottom of the cage. There were no puppies to be found, and she was clinging to life. The care team at the shelter immediately provided the warmth and medical attention necessary. Between her medical needs and being traumatized, in order for her to survive, a foster home was recommended. I was on the shelter’s board of directors, so I volunteered.  Our family had successfully fostered before, therefore I felt confident we could provide a safe haven for a fresh start.

Introducing Lucy.  Upon bringing her home, we felt she needed a fitting name. This little munchkin had reddish hues in her fur. On the off chance she would look you in the eye, you could see there a bundle of personality waiting to be unleashed. For those reasons, she was named Lucy.

The veterinarian determined by her teeth, that she was approximately two years old.  A heart murmur was detected, which may have been the reason she was abandoned.

Regardless of age or health, it was apparent that Lucy had never stepped foot outside of a wire cage. Barking incessantly, twirling circles, and cowering in the corner of a cage if you tried to pick her up, was all she knew how to do. Lucy was clueless on how to eat from a bowl vs. the cage floor, or go potty outside. Our work was cut out.

Learning to Trust. Other animals were in the home, which didn’t seem to bother her. What did upset her, was when I was out of her site. If Lucy could not hear my voice or see me, her separation anxiety became a serious issue. To the point of her having diarrhea, becoming sick to her stomach or horse from barking. To rectify this, I made the decision to take her to work with me. My rationale was that by bringing her to the office, this would help with both socialization and separation anxiety.

Fortunately, taking pets to work isn’t an issue. I purchased a pet “purse” type carrier and started taking her to the office, along with Ernie, our funeral home’s therapy dog. After reading the benefits of thundershirts, I dressed her in these along with tight fitting  tee-shirts. Over time, this helped reduce her anxiety.

Lucy slowly started to journey from her cage at home, as well as leaver her bed in my office an explore. Each day she would go a little further and start interacting with the other animals in the house or at the office. Finally, after a month or so, she started to hold her head up high, gain some pep in her step, curl her tail upwards. Lucy had found her inner dog and started strutting around like the princess she became.

Dog Communication. Potty training was another story! Lucy had no clue that she was supposed to eliminate outside. All she knew was going potty in the cage. Numerous times a day we took her outside and encouraged her to go potty. We tried everything, with no success. It didn’t matter if it was day or night, raining or snowing, when we would bring her in from outside, she would immediately go potty in her cage.

Finally, after leaving her outside in the yard with the other two dogs, she decided to follow behind them and investigate. Each of them had done their business in the yard and she was checking it out! Nature must have taken over. Lucy started sniffing things out, then began peeing on top of the other dog’s poop. Success! There is something to be said for being one of the pack. Apparently, that’s how dogs communicate. From that point on, Lucy connected the dots regarding potty training.

She Chose Me. Over the course of three months, Lucy had learned to eat from a bowl. Take lessons on how to be a dog from the other dogs in the house, developed a fondness for car rides, and mastered walking on a leash. She continued to twirl in circles, but the size of the circles became larger. Lucy was walking proud and holding her fluffy tail up high. She cowered less and wagged her tail more. There was only one challenge left to overcome, her separation anxiety. In all candor, I didn’t know if it could be conquered.

This bundle of life literally had fallen deeply in love with me, and me with her. Who was I kidding? She was no longer a foster. Lucy had become part of our family. I was not looking for her, nor did I want her. She chose me. I had always heard this cliché before, but thought it was just that, a cliché. I’m here to tell you, it’s real. Lucy somehow filled a void in my heart that I didn’t know was empty.

Every morning our pack had a routine. My husband would wake up early feed them, and let them out. When I was ready to head to the office, the dogs would be waiting for me at the bottom of the stairs with their tails wagging.  Together we all paraded to the garage and piled into my car. Lucy even had her own car seat, so she could look out the window. Our route was always the same, stop for a latte and then head to the office. If the routine wavered, you heard about it. The ride would become a bark fest. Aging Adjustments.  Two years ago, Lucy developed congestive heart failure. Under the care of our veterinarian Dr. Peter Jackson and his wonderful team at Lifetime Veterinary Care, Lucy was able to lead an active normal life. It wasn’t until the last six months she seemed to decline. She was still her energetic barky self; however, she seemed confused at times. Lucy also began to have accidents in the house. Dr. Peter recommended Hills B/D kibble, for brain and aging care. I was amazed at what a difference this made. It was dramatic.

We started using doggie diapers, then moved on to making our own dog diapers from children’s disposable diapers. It was simple and cost effective. All that was necessary was to strategically cut a hole in a certain place. The funny thing was, Lucy didn’t mind wearing them.  I even made a “how to” video for our pet sitter.

Soon, diapering Lucy and providing special food just became a routine. Taking care of an aging dog, is just part of what pet parents do. After all, they can’t help it. The irony is, they seem to love you even more and look at you with their eyes as if to say their sorry. I don’t know how many times I’ve apologized to Lucy for not letting her outside quick enough before she pooped in her diaper. Typically, she would just have a wet diaper, because we knew her routine. The diaper would be removed before letting her outside to poop. On the rare occasions when the diaper poop explosion happened, she would be placed in the tub and cleaned up. She never tried to contest this. She knew she was loved and safe.

The Final Journey. On Monday, October 2, 2017, while away on a business trip I received word from my husband that Lucy died that morning. He told me that on the previous day, she was struggling. He shared that night her breathing had become labored. Early that morning, while lying in her favorite spot, she died while he was trying to comfort her.

The other animals in the home were by her side during the entire transition. Sammy, our sheltie, and Lucy’s sidekick visibly mourned. Hearing this very unexpected news devastated me. Intellectually I knew her days were numbered; however, I didn’t realize her heart condition had worsened to this degree. What broke my heart was that I wasn’t there to walk the final journey with her. From the day she came into the shelter, we began walking a twelve-year trek. Lucy and I had become best friends. She was just as protective of me, as I of her. She taught me many things, including how to speak dog. Being in the pet death care business, oddly enough does have its advantages. My husband knew what to do. He placed Lucy into a pet casket and then into cold storage. While this may sound strange, it provided me the ability to gain the closure. When I  came home, I was able to see her one more time. Her little fluffy body was still beautiful. She looked as if she was sleeping. Her cremated remains are going to be placed with all our other pets who have died before her. I know Lucy and the others will be waiting for me at the Rainbow Bridge.

I took a digital paw print, that will be made into a charm, to honor her. The house may be a little quieter, however the memories and joy that she filled my heart with, will always be with me.